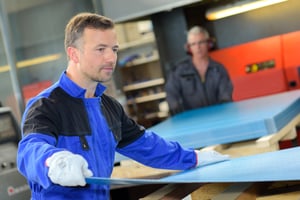 The R&D Tax Credit is a powerful government incentive that can help manufacturers save tens of thousands of dollars - some, even millions - on their taxes.

John Madsen, VP and Manufacturing Practice Leader of Black Line Group, sat down with Janet Eastman of Make it Right: The Manufacturing Podcast to discuss the R&D Tax Credit and the benefits of applying.

Listen to Episode 16 of Make it Right: The Manufacturing Podcast [20:18 Runtime]

The Importance of Manufacturing Experience

[00:36] John understands why the R&D Tax Credit is so valuable for manufacturers because he’s been there. “I started in the late 1970’s in machining while I was going to school for Tool & Die,” said John. “I went back to college and ended up in the later years running an $11 million Stamping & Fabrication company.”

And it’s because of that experience that John is able to help his manufacturing customers find qualifying R&D expenses.

How Difficult is it to Claim the Credit?

“Actually, at Black Line Group, we’ve simplified [the process] as much as possible,” says John. “We’re used to taking large data dumps from manufacturers, and with some of their assistance, we do the sorting, ticking, tying and qualifying.”

How do Manufacturers Use the R&D Tax Credit?

[04:05] “There is a company we worked with, and when they claimed their R&D Tax Credits the very first time, they reinvested in new equipment. They bought machining centers, a 3-D printer, and another company that was similar to their size,” said John.

That company was MISCO Speaker Company. Watch their video on how they used the R&D Tax Credit here.

That reinvested R&D credits not only helped them reach their goals in a more efficient way, but it also brought in a “buzz” that caught-on among the MISCO employees. They were excited to see new growth happening in their company.

Company Evolution Thanks to the R&D Tax Credit

[08:00] The R&D Tax Credit can provide that “shot in the arm” that manufacturers need to grow their business at a faster rate than their competitors are doing. It can also help them keep up with, or push forward, the evolution of their industry.

And that company they purchased? That was a sound testing company. “They’re now able to bring testing equipment in [to schools, auditoriums, churches, etc.], dial it right in to what exactly would be needed for everyone in the auditorium to hear clearly, and they can go back and manufacture it,” said John.

So they’ve completely evolved from drive-in theater speakers to high-end home and business theater thanks to the R&D Tax Credit.

The R&D Tax Credit Helps Keeps Manufacturing In the USA

[11:01] The R&D Tax Credit isn’t just limited to the U.S. and Canada. “There are about 44 countries that are participating in some way, shape, and form in R&D Tax Credits,” said John.

The basic structure of qualifying may vary slightly, but companies across the globe are able to take advantage of some form of the R&D Tax Credit!

“At the end of the day, the government is interested in business and innovation,” says John. “If you have a company investing in equipment, that is going to produce jobs down the value stream. It’s going to improve efficiencies, people are going to upgrade equipment, hire more employees, and hire more high tech employees to run the equipment.”

By reinvesting in your company to make it more competitive, you’ll be hiring more local employees and therefore helping out your own country’s GDP. Take it from John: “It’s a game-changer for manufacturing!”

The R&D Tax Credit is a Powerful Tool

There’s about 10 more minutes to that podcast, and it’s definitely worth your time! Listen to the rest of it here.

Contact Black Line Group today for a complimentary no-obligation assessment of the R&D Tax Credit potential at your company.